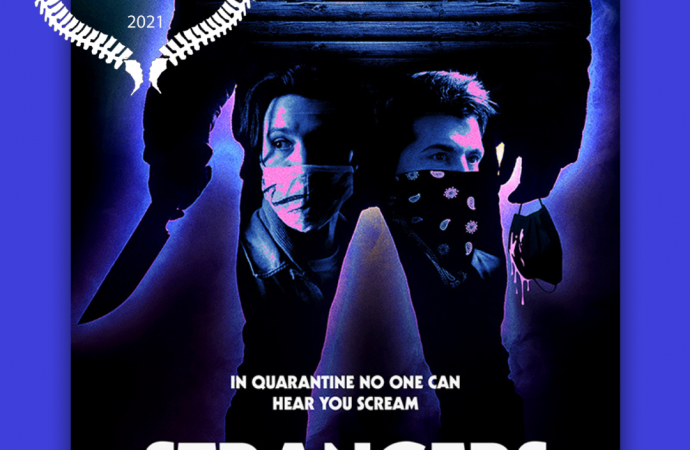 Actor/Writer Adam Huss wrote fellow actor Adam Bucci’s pleasant sweetness into the darkest premise. These two fascinating actors shine in this perfectly assembled cabin horror. Their performances bounce off each other, as if to be a party game. Director Richard Keith Quintero masterfully combines the horror and comedy through pacing and tone. It moves, it’s fun, and makes sure to enjoy the best possibilities in it’s unique time in history.

“Richard was born in Panama City, Republic of Panama. He grew up on the East Coast and attended Georgia State University in Atlanta Georgia. He received a BFA in photography with a minor in creative writing. Although his focus was photography Richard was always obsessed with movies and filmmaking. His graduating thesis project was a feature film he directed called “Point and Shoot”. After graduating he moved to Los Angeles to further his film ambitions. There he became a Cinematographer and Director. He has worked for various outlets over the years including Nat Geo, Rolling Stone, Variety, and Disney to name a few. Richard produced his second feature film “Wannabe” which starred Adam Huss and was turned into a TV show with Marta Kauffman of “Friends, Grace and Frankie” as Show Runner. “Wannabe” was purchased and produced by Warner Brothers Television. He then created another television series “Andy and Chaz” which was produced by Tony Jonas of “Queer as Folk, Friends”. Most recently Richard has created a sequel to the first “Wannabe” film, again starring Adam Huss. And even more recently he directed ”Strangers in the Night” with frequent collaborator Adam Huss and Adam Bucci. “Strangers in the Night” is Richard’s first foray into the “Horror” genre. Richard sought to challenge his comedic directing background by doing what was for him a different kind of project. Since “Stranger’s”completion he has found himself falling in love with the “Horror Comedy” genre and looks forward to further exploring the horror realm.”

“Screamfest Horror Film Festival is America’s largest and longest running horror film festival. The festival runs for 10 days in October in Los Angeles. Screamfest, has launched careers – providing a platform for filmmakers and actors to showcase their latest work to enthusiasts and general audiences. We are proud to show you some of the short films that have screened at the festival over the years. Every week we upload a fantastic short horror film that has premiered in our festival for you.”

Horror fans please LIKE, SHARE, FAVORITE or EMBED our videos with your friends and support our talented filmmakers.